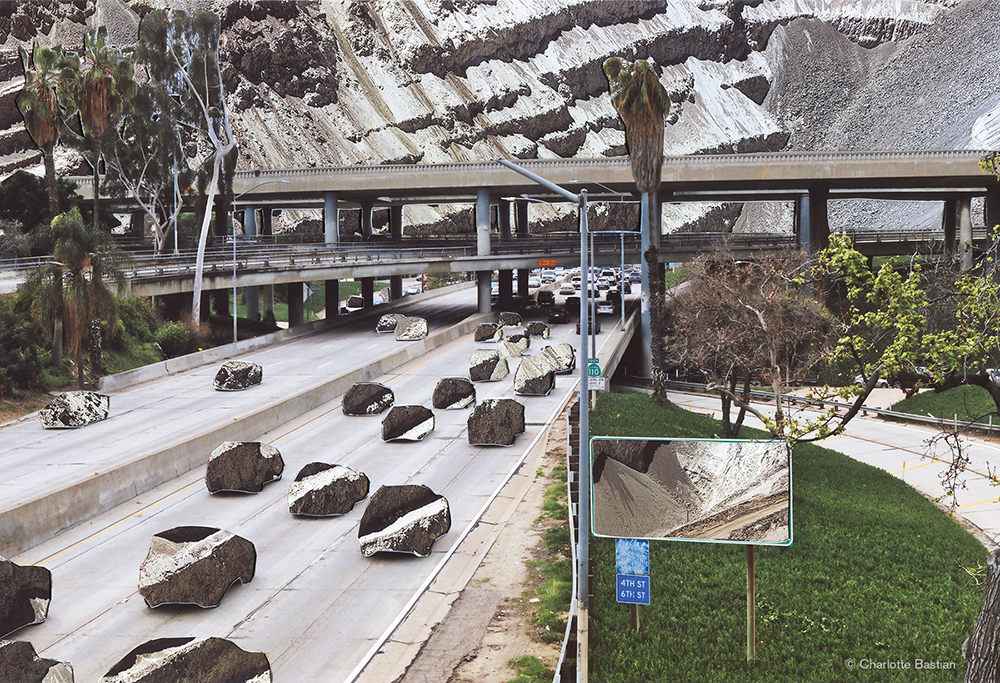 As part of the Images of Architecture* series, the group exhibition “Zu einem neuen Ganzen” is dedicated to the theme of collage as an analytical method. Collage is presented in the works shown – mostly smaller formats – as an artistic concept in which, through the use of various materials (mixed media) and different techniques such as photography, painting, or 3D, insights are conveyed about the sometimes more haptic, sometimes more digital coexistence and juxtaposition of what is depicted. Questions about the essence of photography in architecture-related collage are central, while at the edges it is constantly redefined what collage is and with which related techniques – such as montage – it intersects here. As an artistic approach that addresses the current fragmentations of pictorial perception as well as productively counteracts them through exaggeration, collage presents itself in the exhibition as a consciously critical, constructive, and continuously progressive technique.

As an artistic means of placing architectural forms and details in particular in new contexts and configurations, collage always puts our desire for recognition to the test: Is Katja Pudor‘s work “Future Proof #1,” which plays with the modernist motif of the grid, really images of Le Corbusier’s Villa Savoye in shell form and a side view of a former church building by Werner Düttmann, or does the interplay of forms only allow us to anticipate this? Where in Till Exit‘s “L’espace Double” is above and below, what is a model and what is a copy, and is it even the same space? That there is a detail of the Eiffel Tower in Sinta Werner‘s spatial photo collage – no question. But is it the same person we see twice, even the same image, only varied and thus doubled? Is the immediate optical illusion in two brutalist sections of dam wall embedded in wild flora in Vanessa Henn‘s collage a suggestion of architectural, even static, improvement? Why does the space depicted in Andrea Pichl‘s collage, modular and modernistically tiled by threads, seem like a harmless 1950s interior, while the appropriated motif, in presumed contrast, makes use of a campaign to control global arms trade – reference to political photomontage? And why – from a Berlin perspective – are it above all the collages with the urban space of the capital that help us to put the seemingly familiar in an unfamiliar light: be it Frank Coldewey‘s views of a city under reconstruction, processed in several layers and thus collaged, Ronny Lichtenberg‘s Kreuzberg Pop Art references, as ironic as they are critical, or Evol’s conundrum with a seemingly photographically created, actually sprayed motif with a simultaneously unexpected (cardboard) use of material?

Berlin is also a theme in the work of Juliane Duda: using the means of collage, in the painting “Hansestadt” (2003) the artist pushes a factory site in the former Hanseatic city of Wismar in front of the shell of a building complex designed by Aldo Rossi in the former Hanseatic city of Berlin. Charlotte Bastian‘s images evoke similar moods, in which residual nature and damaged architecture clash equally desolately. In an almost immersive 3D view, to be perceived with technical equipment, the method of collage here achieves an immediacy that seems threatening.

Axel Lieber‘s fragile cuboid, on the other hand, protrudes physically three-dimensionally into the exhibition space: by largely removing the image content from comic pages that have been converted into geometric bodies, an architectural structure emerges that only at first glance relies on the principle of the grid and also plays an ironic game with the idea of the “white cube. One thinks one recognizes similar architectural references in Thomas Ravens‘ “Modern Landscape,” but here, too, they are broken, though this time hardly ironically, but rather as if suspended in a gap between promise and doom. The works of Haus-Rucker-Co and Stephen Willats evoke a completely different, historical view: Haus-Rucker-Co’s “Changer” from 1972 testifies to a utopian, albeit escapist, relationship to natural and urban spaces; Stephen Willats‘ “Lurky Place” (1980) seemingly documents a littered wasteland; in fact, the artist sees in this site near London a terrain for activities that stand outside institutional, conformist norms.

Henry Wegener’s work, which operates at the interface of collage and montage, also brings about a change of perspective on a supposed (urban) wasteland – here, however, it is conceived more optically than sociologically: the artist shows the same spot at the entrance to the Berlin “Schwimm- und Sprunghalle im Europasportpark (SSE)” from two perspectives – a simultaneity emerges that is hardly comprehensible to the human brain. A simultaneity of the non-existent, yet barely conceivable, concerning the collage of the depicted and the materials to be seen is comparably shown by the print work from the new (2021) series “Balconing#5” by Laure Catugier: the familiar and the alienating meet here in a similar way as the motifs in the oil painting by Louise Bristow: is it a matter of first reconstructed and then repainted reality or did the objects and images to be seen never exist? Can real collage also be painted collage? And what is “real” in the face of a volcanic eruption?

Ofra Lapid also spans an arc between object and image: the exhibited work from her series “Broken Houses” goes back to a photograph found on the Internet of a real house damaged by weather. The artist recreated it as a model and photographed it in a studio setting against a gray background to isolate it from its surroundings. In Susanne Bürner‘s work, on the other hand, the relationship between image and model seems to be reversed: here, an image of architecture is damaged, while the real architecture appears out of function but with integrity. Only upon a second look does everything dissolve as an image, thus also disappearing the notion of a separation between photographic model and built reality.
__

*The exhibition series Images of Architecture at “B-Part Exhibition” inquires into the many different ways in which the artistic encounter between image and architecture can take place. In accordance with the characteristics of the exhibition space, consciously thinking from the point of view of the image, the series brings together works by artists in solo and group exhibitions that show different ways of perceiving the handling of, the view of, and the image of architecture.

The exhibition space B-Part Exhibition accompanies the future development of the Urban Mitte Am Gleisdreieck with artistic autonomy and thus at the same time enters into a dialogue with the overarching themes of the overall project – forms of New Work, mobility, culture, sports and a sense of responsibility – and creates synergies between artistic, cultural and social approaches. The artistic director of B-Part Exhibition is Rüdiger Lange (loop – raum für aktuelle Kunst).