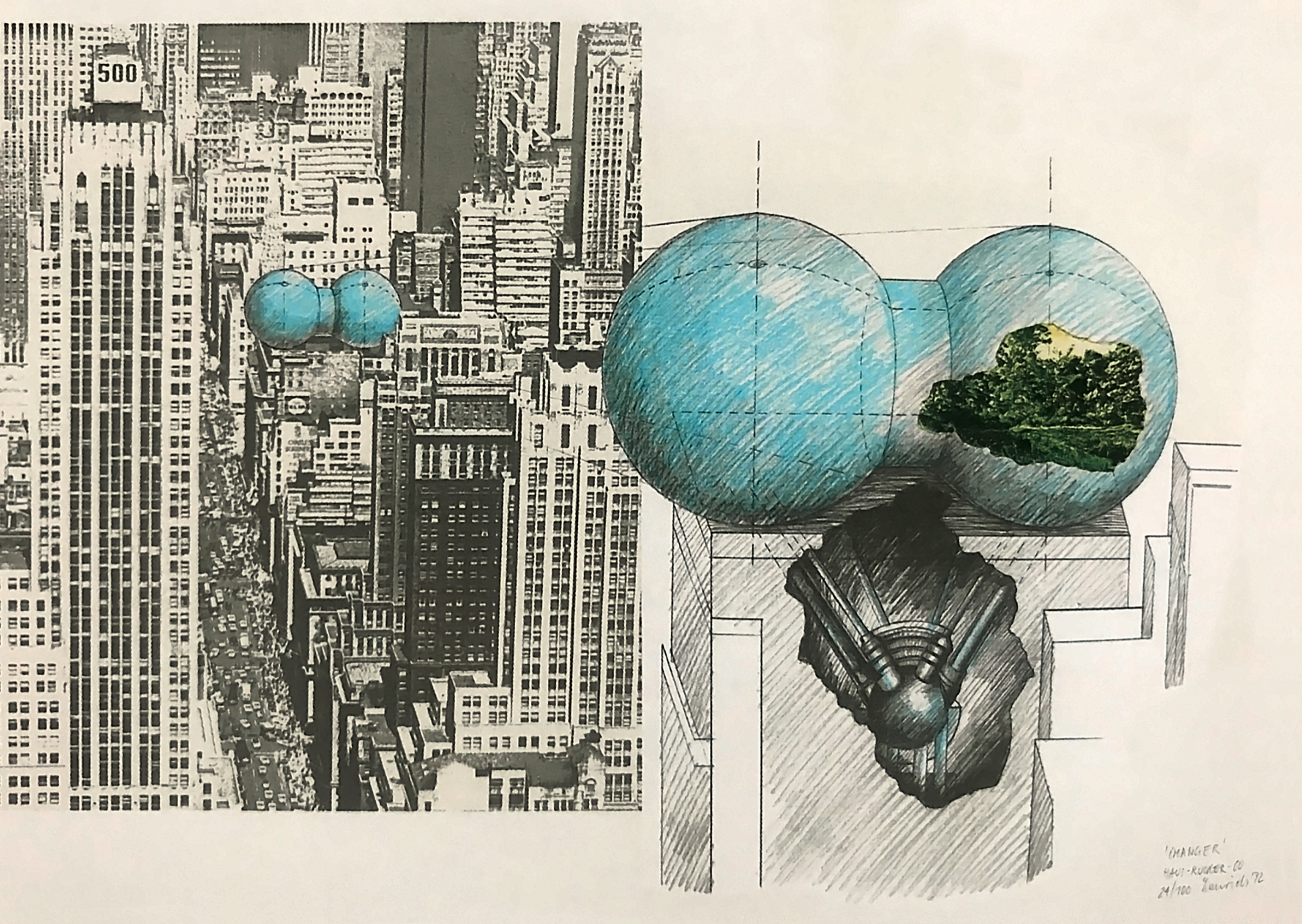 On the occasion of a meeting with the real estate developer and investor Marc F. Kimmich (COPRO), the curator Rüdiger Lange (loop – raum für aktuelle kunst), the architect Markus Penell of O&O Baukunst and the curator of the Syd Mead – Future Cities exhibition, Boris Hars-Tschachotin, the design legend Syd Mead, decisively involved in making Blade Runner (1982) a cult film, was discussed. The production design of the US-American industrial designer and Visual Futurist still has a lasting impact on current visions of urbanity. The Exhibition Syd Mead – Future Cities at O&O Depot is dedicated to him. Thus, in October 2019, the idea was born to thematically span the arc from the worlds of Syd Mead to Berlin and the Urbane Mitte Am Gleisdreieck, and to show selected works by the architectural rebels Haus-Rucker-Co at B-Part Exhibition.

From the 1960s onwards, Laurids and Manfred Ortner, founders of the architecture firm O&O Baukunst, developed fantastic futuristic visions of playful-psychedelic optimism for the city of tomorrow as part of the Haus-Rucker-Co artists’ collective. They wanted to give the classic buildings a good jolt to create space for new urban spaces and ideas. They saw themselves as “house jolt man,” in other words: Haus-Rucker, and moved eloquently and with enormous media impact between architecture and art. But at the beginning of the seventies, the multicolored, carefree experimentation turned critical. With the destruction of the environment on the one hand and the relentless nuclear arms race on the other, the optimistic lightness of the works turned into a life-preserving urgency.
The drawings, collages, models, and photographic and film documents shown in the exhibition highlight precisely this theme by critically questioning our relationship to natural and urban spaces, in which artificial culture and natural landscapes are brought together and intertwined.

The cabinet exhibition on Haus-Rucker-Co at the B-Part Exhibition thus responds both to Mead’s cinematic visions of the future and to the actual current transformation of the Urbane Mitte Am Gleisdreieck. B-Part is the temporary place in which, as an experimental laboratory, future urban building, and social forms, the mobility of tomorrow and the future of the world of work are researched and new concepts developed.
The Exhibition thus links diverse perspectives on the theme of tomorrow’s city.

For the opening of the Exhibition on January 9th, 2020, the Urbane Mitte Am Gleisdreieck as a model of a city of the future, the work of visionary Syd Mead, and the artist group Haus-Rucker-Co will enter into a new dialogue on architecture, art and science fiction.
What are the conditions and possibilities for living and working together in the urban agglomerations of tomorrow? Syd Mead, Haus-Rucker-Co, and Urbane Mitte have each developed their own trendsetting ideas, which will be discussed in a conversation between Manfred Ortner (Haus-Rucker-Co), Markus Penell (Urbane Mitte Am Gleisdreieck) and Boris Hars-Tschachotin (Syd Mead – Future Cities).

The exhibition space B-Part Exhibition accompanies the future development of the Urbane Mitte Am Gleisdreieck with artistic autonomy. It simultaneously enters into a dialogue with the overriding themes of the overall project – forms of new work, mobility, culture, sport, and a sense of responsibility – and creates synergies between artistic, cultural, and social approaches. The art director of the B-Part Exhibition is Rüdiger Lange (loop – raum für aktuelle Kunst).